Are you confused between render and brick? It’s often confusing for many homeowners to choose between these two wall materials. While bricks offer a traditional look and a timeless appeal, render is a contemporary wall finish that transforms a house instantly.

Whether you’re planning to renovate your façade, extend your house, or build a new house, it can be quite challenging to choose brick or render. Both options add protection to a house against weather elements. Also, they offer sound insulation, pest protection, and enhanced fire resistance. 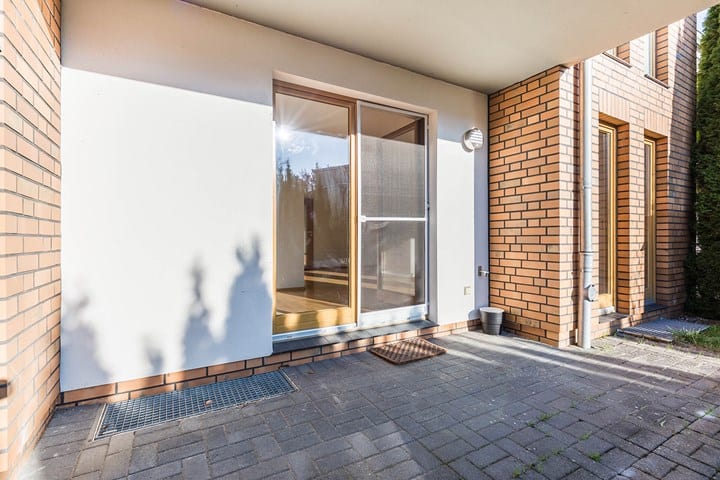 Fortunately, there’re certain properties that set them apart. Knowing their unique properties can make it easier for you to choose between the two. In this article, we’ll compare render and brick in detail.

Building an Extension or New Home with Render

If you walk down most streets in Sydney, you’re likely to see several homes with rendered facades, with some featuring a pebbledash finish and others featuring smooth, white terraces.

Essentially, rendering involves applying a render material over concrete or brick walls. It’s a wall coating technique that has been used for many decades.

While rendering exterior walls is a popular wall coating technique, there’re certain reasons why some homeowners don’t like it. Thus, it’ll help to look at the benefits and shortcomings of rendering.

Render offers an extra layer of protection to an existing wall against moisture. It’s particularly helpful for older properties made of solid walls.

In case moisture penetrates solid walls, the property becomes exposed to numerous problems that result from dampness including mould on carpets and rotting wall skirting boards.

However, you should remember that applying a render material over a damp wall will only worsen the situation. Fortunately, most modern properties feature cavity walls that are less susceptible to this problem.

Some homeowners prefer to render specific areas of their home or the entire house for aesthetic purposes. Generally, render materials come in several designs and colours to choose from.

Thus, they’re a great way of freshening up your house. Also, you can choose from different finishes including smooth or textured, painted or pigmented, coloured or natural, and coarse or fine depending on your preferences.

Applying render, especially a light coloured option, improves the insulation properties of a wall. As a result, your home will experience improved thermal performance. Also, if you have any plans to install insulation on exterior walls, rendering will be a cost-effective option.

However, all types of render, including mineral, acrylic, and silicone tend to develop some hairline cracks, especially when the existing brickwork is quite old or was damp during application.

In such instances, moisture may penetrate the rendered wall through the hairline cracks. Once the absorbed moisture freezes within the wall, it’ll expand and blow out the rendered surface.

Consequently, the brick beneath may get exposed. Repairing exposed patches of brickwork will require removing the old render, scraping the joints, hosing down the wall surface, and applying render in two successive coats.

Any homeowner who has plans to sell their home or anyone dealing with an investment home should consider whether rendering is a good decision.

Ask yourself whether rendering will increase the value of your property. Consider whether the amount of money you’ll spend on rendering is worth it.

Real estate agents in your area can suggest profitable ways of increasing your home’s value while making sure it becomes appealing to more potential buyers.

For instance, tidying up the garden or painting the trim can enhance the visual appeal of a brick home. Consequently, it’ll be able to attract buyers who’re willing to pay a lot more for your home.

Generally, external rendering costs about 60 pounds per square meter. Thus, a basic semi-detached three-bedroom house will cost you not less than 4,800 pounds.

Also, you may incur extra costs of hiring a professional rendering expert, painting the rendered surface, and maintenance. In case the external walls of your property aren’t insulated, it’ll cost you about 100 pounds per square meter to apply render.

A rendered wall is more prone to weathering. Weathering will eventually cause stains and fading. You can keep the external walls of your property looking fresh by repainting them every 10 to 15 years.

Also, rendered exterior walls, especially for commercial properties in public areas are prone to unauthorized writing and drawing by graffiti artists. Thus, it’ll cost you more money to repaint the walls now and then.

It depends on the kind of building and its location. For instance, properties built within national parks, conservation areas, and other protected areas shouldn’t be rendered without seeking permission from the relevant local authorities.

Building an Extension or New Home with Bricks

For many centuries now, bricks have been a popular building material. Bricks are known to have been used in the construction industry as early as 7500 BCE.

On the other hand, sand-lime bricks are specially made for use in making hidden walls.

Here’re some of the main benefits and shortcomings of using bricks for building ornamental facades.

Since bricks are among the oldest construction materials used to date, their beauty has lasted through centuries. Thus, it’s less likely for your property to be valued at a lower price in the future as a result of changing trends in other wall cladding materials.

Advances in the manufacturing industry have transformed the once humble bricks into decorative construction materials that are available in numerous finishes, textures, and colours.

For instance, you can consider the elegant look of classical red bricks. Also, you can opt for the glazed symmetrical look and sophistication of modern bricks.

If you want your contemporary home to feature a striking look, consider using bricks with high-impact textures and patterns.

Although bricks are relatively expensive, they’re one of the most trustworthy and sought-after construction materials. Thus, they’re a very secure investment, thanks to their great resale value.

Besides paying for themselves, bricks also offer short-term returns as they’re energy-efficient and low maintenance.

Bricks are a low-maintenance construction material. They don’t require any sealant or paint to maintain some of their best properties including weather resistance, durability, and appearance.

Even after five decades, a well-constructed masonry wall remains maintenance-free and strong.

Bricks are made from naturally abundant minerals and clay. Thus, they’re a sustainable construction material that boasts of a very long lifespan.

Once reclaimed, they can be re-used to make new brick walls or crushed to make road surfaces, paths, and roof tiles.

It’s quite challenging to find replacement bricks that can match existing brick walls. Thus, you may end up with a mismatched brick wall when repairing an old brick wall.

Fortunately, our experts at Sydney Rendering Pros can find you matching bricks to ensure that you get a perfectly matching brick finish when repairing an old brick wall or extending an existing brick wall.

Since bricks are made throughout Sydney, they’re available at highly competitive prices. However, building a property with bricks tends to be more expensive than other construction materials.

The reason behind this is that constructing a property with bricks requires extra construction materials. For instance, concrete blocks are larger than bricks such that the space a concrete block covers would need about six bricks.

Typically, bricks represent about 5 percent of the total cost of building a new property. The cost of each brick varies from about 300 to 1,200 pounds per 1,000 pieces of bricks depending on the demand during the time of buying them and the manufacturing method used.

Although bricks aren’t susceptible to cracking like a rendered wall, bricks are sometimes prone to moisture damage. Whenever moisture from melting snow, rainfall, or the soil enters the bricks, it may freeze during cold weather.

Thereafter, it’ll thaw during warm weather and cause spalling. Spalling tends to start like small cracks that eventually grow bigger and cause crumbling.

Fortunately, spalling can be prevented with top-quality breathable sealants and drainage systems. Also, spalling can be repaired by a professional mason. The mason will remove the affected bricks, followed by replacing them all with matching mortar and bricks.

Unless a property is built with double brick walls, it won’t offer sufficient insulation like rendered walls. Concrete blocks that make rendered walls are larger than regular bricks.

In case you’ve made up your mind that rendering isn’t the best option for you, then you should source the best bricks for your construction project.

At Sydney Rendering Pros, we work closely with many reputable brick suppliers and can help you find matching bricks for your project. Contact us today at 1300 869 590 for all your brick needs in Sydney.