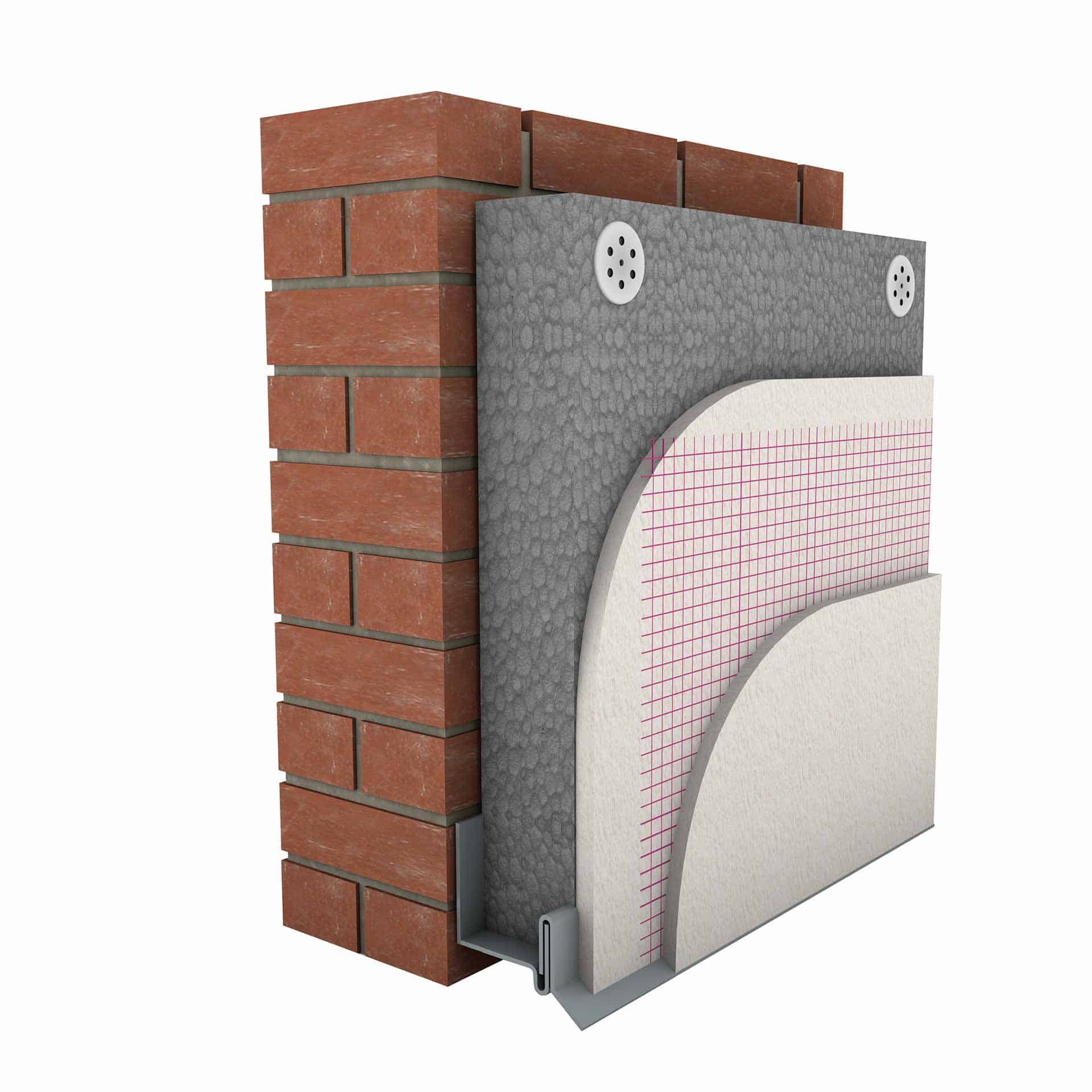 Generally, the design of insulation render and its installation is best left to rendering or professionals. It shouldn’t be taken as a DIY job.

In most cases, insulation render systems come as proprietary products such that the design methodology and standard details are decided upon by the manufacturer.

Insulation render products are typically accredited by third-party bodies for application in various situations. They’re often guaranteed as long as they’re installed by a contractor approved by the manufacturer.

Although the construction techniques employed in making rendered insulation systems are largely similar, the systems differ in terms of render finishes and the type of insulation.

The above U-values are based on solid brick walls with a U-value of 2.2 and a thickness of 215mm.

How to Avoid Thermal Bridging

These fittings are used in fixing the insulation onto a wall. The fittings form several thermal bridges that have a similar effect to that of the ties in a wall cavity.

You can avoid thermal bridging by:

There’re several types of base renders including:

Essentially, acrylic render comprises acrylic as the bidding compound instead of cement. Also, it includes high-quality sand or aggregates.

It comprises two render coats with a total thickness of about 4 to 6mm. It’s often used in circumstances where there’s a lower likelihood of damage and a lot of exposure to light.

The reinforcement used comprises a glass mesh or mineral fiber. Acrylic render has numerous advantages including being lightweight, weather-resistant, breathable, and high elasticity.

Cement render is often mixed on-site. However, it can be supplied to the site while pre-mixed. Pre-mixed cement render often includes additives that make it easier to apply and improve curing.

It comprises two or three coats totaling 16 to 25mm. It’s mainly used in exposed weather conditions. Also, it’s ideal for application in situations that pose a higher likelihood of damage.

Reinforcement is done using galvanized or stainless steel. However, cement render tends to crack over time. Thus, there should be movement joints to prevent cracking. Also, cement render is quite heavy.

Hydraulic lime render is often used alongside Foamglass insulation on a 10 to 12mm coating. It’s reinforced with a glass fiber mesh and a 3mm thick decorative layer.

It’s reinforced with glass mesh or mineral fiber. The polymer in the render mixture reduces its weight.

Also, the polymer allows it to be applied in both high and low-rise buildings.

The polymer content often varies from one PMCR system to another and the application requirements. PMCR is a medium-weight type of render.

Hemp insulation has been used for quite some time. Today, lime render is often mixed with hemp to form a blended render.

Although it’s not yet ascertained, manufacturers argue that this render enhances the insulation of solid brick walls.

It increases the U-value from 1.71 to 1 for a brick wall with a 215mm thickness when coated with a 50mm hemp-lime render.

A finishing coat of lime plaster is applied to enhance the longevity of the render.

Insulating renders often include a render system combined with an insulator. The insulator may include vermiculite, perlite, or polystyrene balls.

However, it doesn’t have a significant improvement in the render’s thermal efficiency.

It’s often used in areas like door and window reveals where the dimensions make it challenging to apply other forms of insulation.

In such situations, insulating render may reduce thermal bridging.

They’re ideal for application on both thick and thin coat renders. They enhance the resistance of a wall to cracking.

Also, including silicone in render enhances its water-repellent properties and allows water vapor to pass through it freely. Thus, the dry surface resists lime bloom and algae growth.

You can choose from several finishes and textures of acrylic and silicone renders.

Also, the finishes can be done using a wide selection of rollers and trowels. It’s also possible to apply the finishes using a spray.

The textured coating should be applied carefully to allow for a consistent finish.

It’s pre-coloured and comprises large-sized grains. It allows for a textured finish once scratched.

Also known as pebbledash or spar dash, aggregate dash is used as the background for roughcast or dry dash finishes.

It’s a self-coloured, polymer-modified, and cement-based render. It incorporates small, even pebbles that allow for a textured render finish.

It’s typically applied on a dash receiver and base coat.

It allows for a clean and smooth finish. It’s available in several colour options.

Tyrolean finish is a weatherproof and hardwearing render. It’s achieved by spraying repeatedly to achieve a coating with a thickness of at least 4mm.

The render is typically applied on a smooth, polymer-rendered, and coloured layer.

Cement-based renders tend to crack over time due to moisture variations and temperature changes. More flexible and thinner acrylic-based renders have a lower likelihood of cracking.

You can replicate the look of traditional brick walls by installing brick slips. In the recent past, several systems have come up as replacements for aligning brick slips and adhering them to a board backing.

Today’s advanced systems allow for the mounting of brick slips on several formats such as wire mesh and polystyrene backings.

Work Stages For Rendered Insulation and the Tasks Involved